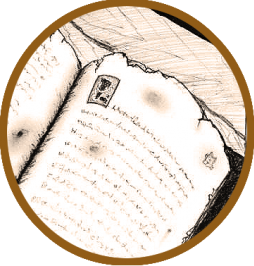 Hear ye! Hear ye! The Warlock's Journal has appeared in a new location! What is the Warlock's Journal? Let's let Vicki Potter from Tabletop Adventures explain:
The Warlock’s Journal is an interdimensional book that teleports from place to place, recording knowledge in whatever location it finds itself. The places it goes may be widely separated in time and space and even be in different dimensions or alternate realities.
The handful of people who have actually seen the book more than once suggest that it sends its information back to some central location, as they have seen the book nearly filled with information, only to find it almost empty again, or filled with completely different information, at some later point.
Of course, since there is no real proof that the book itself travels through time in a linear manner, such analysis is speculation at best. What powerful entity could have created such a marvel? Where is the ultimate repository (if any) of the wealth of knowledge collected by the Journal in its roving, and is its creator still waiting there, learning about the multiverse? It is, perhaps, better not to know.

This is the fourth Warlock's Journal contest. Here are links to the previous contests:

This time, the Warlock's Journal appeared in the editing room for the appendices for Fields of Blood and Honor, where the staff at Flying Hare Productions are working to expand our initial work by adding animals and monsters as gladiator types. Unfortunately, by the time we discovered the Journal's presence, the ink from one of the entries leapt off the page and into the Journal, where it was promptly rearranged into indecipherable symbols. What's more, the Journal then fired some mystical energy ball that erased our memory of the what we had written. After several attempts to recall what it was, we realized that we needed you, our loyal readers, to trigger our memory.

The contest is to come up with an unusual animal or monster suitable for use in a gladiator arena. We know the following things:
·        Description: [What it looks like when meeting it in the arena]
·        Preferred Weapons: [What weapons and/or natural tools it uses]
·        Preferred Armor/Shields: [What armor or shields it uses, including natural armor]
·        Tactics: [Brief description of how it fights in the arena]
·        Five Ideas for Power Moves: [Power Move 1—What it does]
[Power Move 2...]
[Power Move 3...]
[Power Move 4...]
[Power Move 5...]
So here's the deal. Come up with your own animal or monster stat block using the format above and send it to flyinghareproductions@gmail.com with the subject "Warlock's Journal Contest" by January 20. Although everything in the Warlock's Journal is system neutral, you may include system-specific statistics in a separate appendix (this will not count toward the word count). Don't worry if you can't get all the formatting perfect; if it's clear what you mean we can edit the submission to match.
Your entry must include your real name and e-mail address, so we can contact you, but you may provide a pseudonym for publishing. E-mail addresses will only be listed in the final document if we are given specific authorization to do so.
At the end of the submission period, all entries will be gathered into a PDF file with no names or stats attached and linked to this site. Also, a link to a voting survey will be given.
Voting will be done through Survey Monkey, and will close January 29. If there are a small number of entries, there will be full Instant Runoff voting. Otherwise, we will run the Instant Runoff process as far as we can, and if no submission gets a majority of the votes, the leader at the end of the process will win. More information about the specifics will be published when the voting period opens.
You are allowed to submit multiple entries. Each entry must be in a separate e-mail. Flying Hare Productions reserves the right to edit submissions for clarity and adherence to form.
At the end of the voting period, all entries will be gathered at the end into a PDF file with the contributors's names (or pseudonyms) revealed and system-specific details (if provided) available for free download. His or her submission will be put into the updated Fields of Blood and Honor as the "Warlock's Journal Contest Winner" when it is completed later this year, and the author will be credited as a contributing writer of the book. The winner will also receive three links to complimentary copies of the updated book.
In addition, Flying Hare Productions reserves the right to use any other entry that the staff deems worthy of inclusion. If a non-winning entry is used this way, the author will receive credit in the updated book and receive one complimentary copy. Such entries will be listed as "Honorable Mention" submissions in the book.
Good luck! You have two weeks to get your entries in, so don't delay! The last Warlock's Journal contest had someone enter late; enter now so you are not that person this time.
Posted by Dominick at 10:00 PM